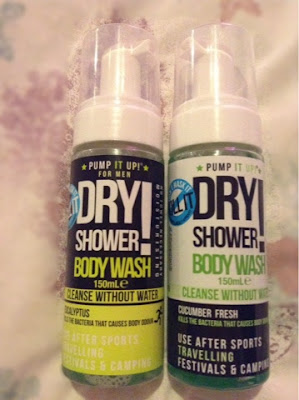 So last week when I was in boots I spotted a display of these dry shower body washes. As it was an entirely new concept to me I decided to take a look! At first I was a bit dubious, but they are PH Balanced and paraben and alcohol free.

At first I thought the concept was rather strange. I understood it's appeal for festivals and as it is antibacterial it does far more than body sprays as it isn't just masking the smell, but I questioned would I find any use for it?
I originally just bought one for my husband and he loved it straight away. It's great for a quick freshen up during the day. It absorbs quickly into your skin and doesn't leave a residue!

I also bought myself one, as sometimes when I finish work I feel like I smell disgusting (one of the perks of working on an elderly care ward I suppose) and it's really great for a quick freshen up to save my fellow commuters from my stench!!

It's available from boots for £3.

Have you tried this? Would you give it a try?