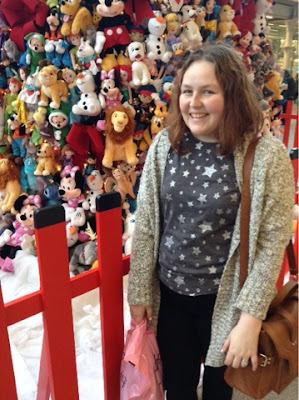 I know, I have lots of posts to share with you from my holiday but I just can't face putting summer clothes and hot weather on my blog in DECEMBER. December has to be Christmas and nothing else! In the week me and Tom went to London! I absolutely love London, and if I ever win the lottery or the NHS decides to pay me a lot more for my job I will be moving to London. Until that day however I need to be content with going very now and again!

You may also notice I am wearing my favourite bargain starry top AGAIN ...

Although we got the coach to Victoria (Fun fact, £5 each each way with National Express fun fares was amazing) I made Tom take a trip with me to St Pancras because I had seen this disney tree all over social media and I am basic like that! He was happy though as it meant he got to go to the brew dog bottle shop (and then we ended up having a 5 mile walk which was term ... fun.) 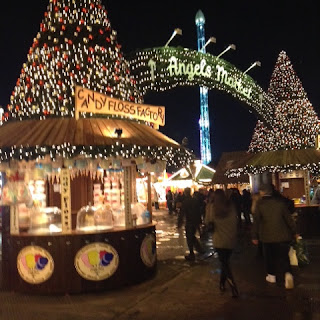 We got to London at around lunch time on Tuesday and went on the hunt for food. The idea was to go to somewhere we hadn't been before, however once we got the scent of Five Guys we were sold. As it was Toms Christmas present I had to do what he wanted! I also tried cherry and vanilla coke for the first time and now while I am writing this I want more.

We went To see Jersey Boys at the theatre and I was quite disappointed. For me, there just wasn't enough dancing and story to make it an amazing musical but the singing was fab!

We then went for a walk through Winter Wonderland which wasn't quite what I was expecting. I didn't realise there would be so many rides and it was all a bit loud for me! I know this is sounding really negative but its not meant to be!! 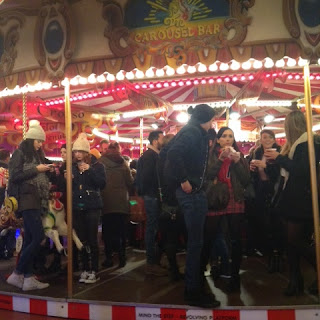 One of the coolest things I spotted was this carousel bar! It is actually moving while people stood on it and had a drink! I thought it was such a novel idea!

We then walked back to Victoria for a night in our budget but comfy hotel!

Stay tuned tomorrow for what we were up to on day 2!