Every month I come here and say how is it the end of x month already? Yet, know we are at the end of 2015! How on earth did that happen? December itself has gone really slowly which I have enjoyed, as I have really been able to savour the month. I have been blogging everyday now since the beginning of November and I am really enjoying it. I am discovering more and more blogs, I have an outlet for my brain!

Anyway I thought I would try and do a round up of my year as best as I can here! 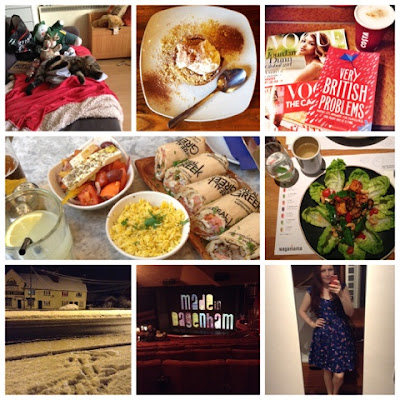 The first photo I took this year according to my ipod is this one on the top left when I found my cat Fagan rolling around on my uniform! In January we took a week off work to go to London for a week of musicals, sale shopping and good food including the real greek and our first trip to Wahaca! We also had a lot of snow in our village near the end of the month! 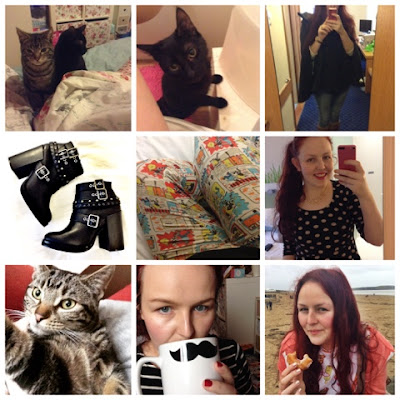 February was a busy month! For Christmas last year I bought Tom some tickets to see the snooker in a couple of places around the UK which meant we had a few little mini breaks. So the first trip was to Cardiff, but we ended up spending a couple of nights in weston super mere, spending the day in Bristol and then going for a couple of nights in Cardiff. I did quite a bit of shopping and I also purchased my favourite Bargain ... An oasis Cape which I wrote about here. 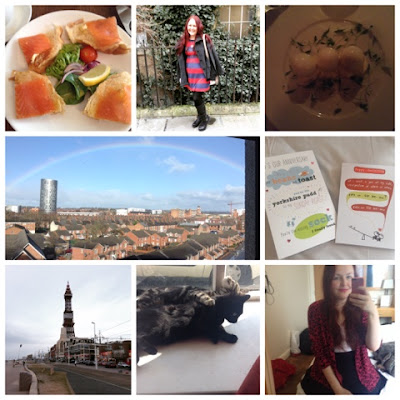 March was more trips! Starting off with a trip to a Marco Pierre White restaurant and hotel for our second wedding anniversary. The food was amazing and we also got upgraded to a beautiful suite which had a massive windmill in the room! We also visited Bath, Blackpool and Llandudno this month! We really got about a bit at the beginning of the year! 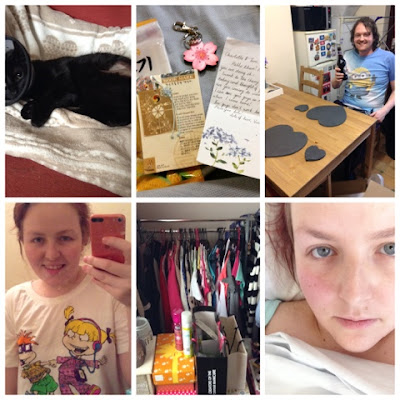 April was a poorly month in our household! Poor Nancy had her operation and was feeling really sorry for herself as the boys kept on hissing at her! We finally bought a kitchen table, and I started sorting the house out (Hint this still isn't anywhere near finished) However I then ended up in hospital and was pretty poorly with both my physical and mental health. At the time I didn't really take control over it and I had a really nasty experience with a consultant ... so I tried to hide from it which didn't help anyone! 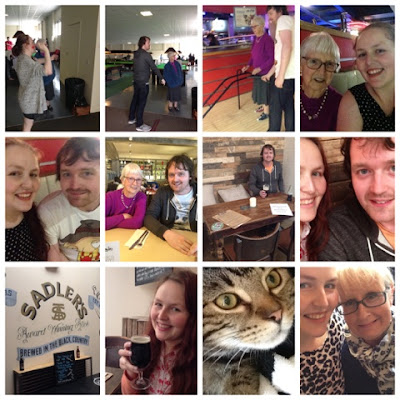 In May we went to Butlins for the week with Nana. It was great to have some time off and to really chill. I spent a lot of time resting and snoozing on the sofa! We also went to Sadlers brewery for Toms birthday present! I went back to work and finally reduced my hours, increased my medication and started getting back on track! 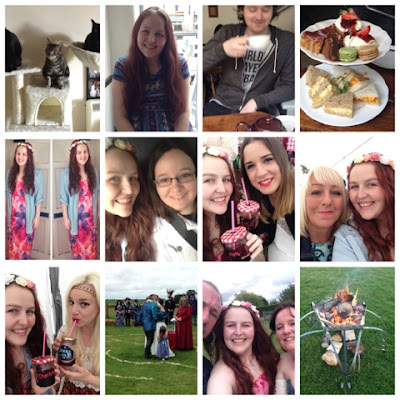 June was when I properly started my blog! It feels like such a long time ago now! We went to Mrs Bridges Tea room for the first time and I absolutely loved it! The freshest sandwich I have ever eaten! I really need to go there again soon ...

My absolutely favourite thing about June was Sharon and Grahams hand fasting. The whole day was absolutely beautiful! I have never been to something like that before and also spending time with the girls I work with outside of work made me see them all in a different light. 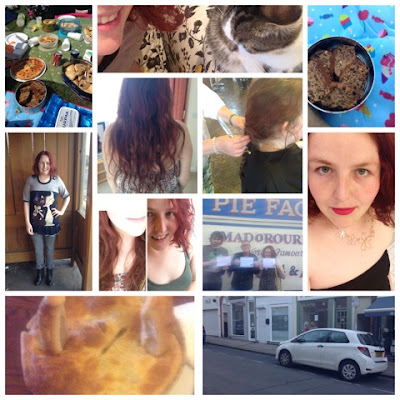 July was the month I cut off all my hair! At the time I really loved it and I am glad I did it because I raised money for a worthy charity, but now I am just hoping it grows ... QUICKLY! 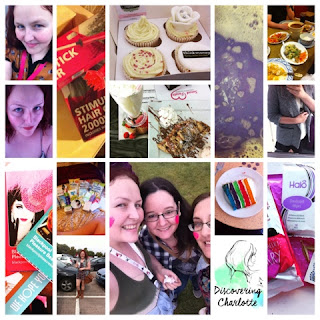 August was the month of my first blogger meet! I travelled to Nottingham to meet up with a lovely group of girls. We had a demonstration at Lush, we then went shopping (They introduced me to KIKO) and then for the most amazing lunch at Jamies Italian! This month I think I can see now is where my diet started going downhill. I was unable to attend Slimming World classes and I just wasn't sticking to it myself!!

I went to Thai Arts and A new dessert place, I went to V fest and I feel like I finally started to get my anxiety under control! We also went to Blackpool for a few days with my brother while my parents were on holiday! I went to a second Blogging Event in Manchester with Think Money and I also bought myself my blog header from DorkFace which I think totally transformed the look of my blog! 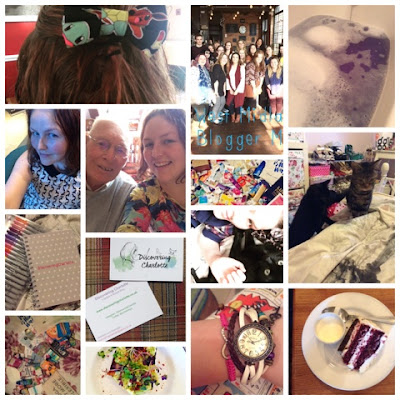 September was another great month for blogging events! I managed to attend the Bloggers Festival in London and the west midlands blogger meet. Going to London alone was really scary and I had a panic attack in Victoria Station but I ended up meeting up with Jude (Theweeblondie) and Holly (TheHollyDays) and after a bit of a wander I was loving life again!

Then before the west midlands meet a group of us met up for brunch and I felt like i had found my people! I just really clicked with the group and I really enjoyed being back in the west midlands where I grew up! I am hoping to see a lot more of the group in the new year! 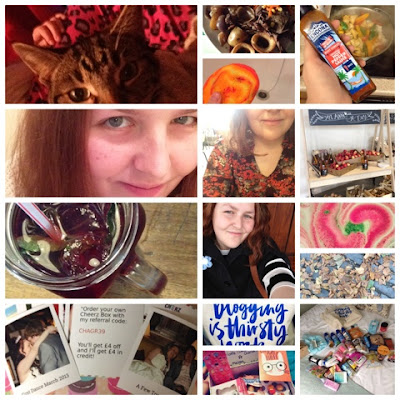 In October I went to another Pretty Lovely Bloggers event! This time in Bristol, and I managed to go because I was going away for the weekend with Tom to celebrate the fact we had put up with each other for 5 whole years! My physical health seemed to go really down hill and I couldn't do as much as I wanted, including having to drop out of the Slumber Party (which from seeing everyones blog posts I missed out on an amazing weekend) 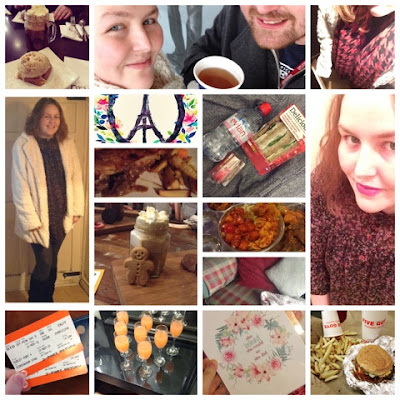 November started my countdown to Christmas! I went to a few food fares and events all around the midlands! I went to two blogger meet ups closer to home in Leicester. It was lovely to meet the Leicester bloggers and next year we are planning to have an informal coffee date every month next year to chat all things blog and hopefully work out some collaborations and events! 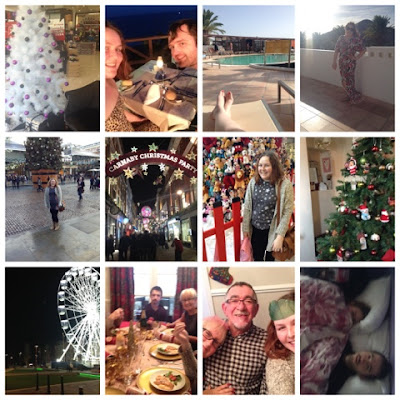 This month has been pretty fabulous actually. We started off the month on holiday in Fuerteventura which was a much needed relax! I spent a lot of time just chilling, reading blogs and drinking cocktails!

Then it was onto London and all things Christmassy! Finally after working for what seemed like forever (In reality 6 days in a row but when you have fibre that may swell have been 6 months) I went home for Christmas! I spent three days with my family, ate lots of food, opened presents and went sale shopping (Online of course, boxing day is spent in my PJs)


My Blog this year

So this year I actually started dabbling with the idea of blogging and wrote a few posts at the beginning of the year which I have now deleted. I started getting into it and wrote a few posts in June and then throughout July, August, September and October I was blogging mostly every other day. In November I took up Rosalilums blogging everyday challenge and now here I am at the end of December still daily blogging and don't really intend on stopping any time soon.

Without a doubt my biggest success was my Open Letter To Cosmopoliton. I was really annoyed with their article and just had to have a little rant. I could never have imagined all the retweets and comments that I got from my fellow bloggers!

That brings me on to a thankyou. To all the lovely bloggers I have met or spoken to this year. I am so lucky to be surrounded by such a wonderful community of people who make me feel honoured to be part of such a supportive community!