Earlier on in the month I read Elise's post about a year of Buyer's Archive. It was one of the posts about how she spends her money that drew me into her blog in the first place, and it really made me feel guilty this month. You see, I have a real downfall.

I love charity shopping, and this isn't in itself a downfall, but I tend to fall into the trap of buying clothes without trying them on. Sometimes I conciously know that they are too small, and think because I am doing slimming world I will fit into them someday. I have bought some real bargains (I got a zara yellow jacket a couple of months ago (brand new with tags for £1.75) but seeing these things hanging in my wardrobe makes me sad they dont fit right now, and well, its a viscious cycle.

Somethings, I see in my size and pick up ... but get home and they don't even go past my thighs. Then I think, this is probably how they have ended up in a charity shop with their tags on in the first place and then again I feel dissapointed in myself.

So, I decided I would share everything I have bought this month INCLUDING the things that are too small, and then make a little pledge at the end ok? So here goes, the first buyers archive on Discovering Charlotte! This month I am only including the things I bought from Charity Shops ... I went a little mad in the sales and this post would be months long ... 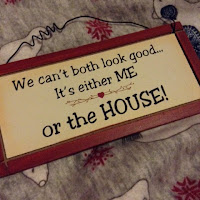 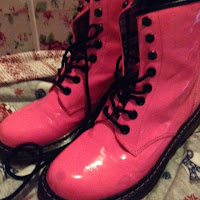 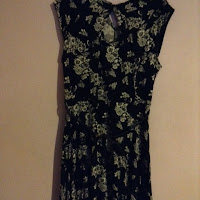 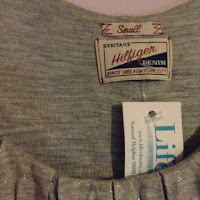 So the first little charity shopping spree I had this month was in Life Leicester. I didn't even mean to go in, I was on my way to the gym! But when I saw those bright pink boots in the window I had to pop in. The shop were having a half price sale, which meant the boots were £5. I don't think I would have bought them for full price but when they fit I just couldn't leave them!
The little sign on the left was 75p and is originally from HeartWarmers and I have a few other pieces from them around the house.
Then I picked up two dresses! The one on the left is originally from Dorothy Perkins and has this beautiful black and white flower pattern. It also has little blue birds which I don't think you can see from the photo. I have already worn this to the Kitchen launch in Leicester and it was so comfy! The second dress is this grey and silver Tommy Hilfiger dress that was £1.50. I was totally sucked in by the quality of this item, and didn't really take into account that its a small and doesn't fit yet.
Total: £9.25 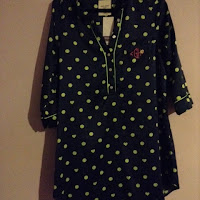 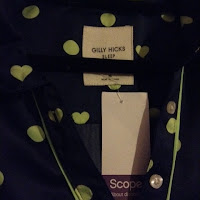 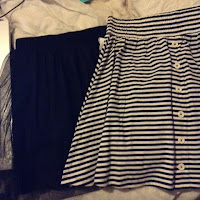 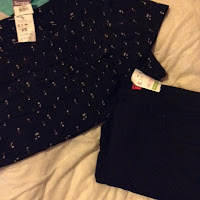 So on another shopping trip this month I went to Hinckley. This is where we go to the cinema, and so there is always time for shopping! The first place we went was scope, and I picked up the Gilly Hicks silky sleep shirt for £1! All of there nightwear was reduced to £1 and some of it was really worn and so I thought it was a great bargain. Again though too small.

I also picked up the black skirt on the left which is a topshop brand new with tags for £2. It is a black bodycon skirt with an almost ballerina style net skirt over the top and would have been £22 in store. I do need to figure out what to wear it with though! Over in the right hand picture is a black top with musical notes all over it which I paid £2 for. Its my size but the arms are soooo tight!

The striped skirt with buttons down the front was from a shop which I am not sure of the name but they sell a lot of new clothes. This was in the new section for £3 and it actually fits!

Last but not least I bought some black skinny new look jeans for £2.99. Despite being the same style and size as some pale ones I already own, they are too small. Grr. 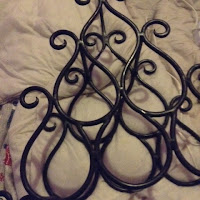 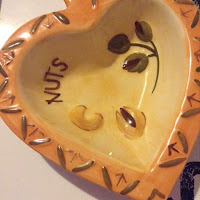 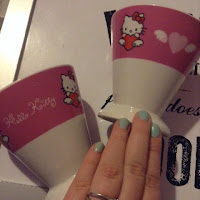 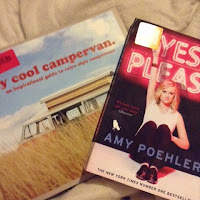 Firstly on the left was this wine rack! You may be thinking, Charlotte, you don't drink wine so why have you bought a wine rack? Well I am addicted to Pinterest and I saw this photo which immediately made me think ... I could totally do that! I got it for £4.50 from the woodside animal charity shop.

Next I bought this cute little nuts dish for £1.50 from the Marie Curie shop because ... well I serve a lot of nuts?

These two ceramic cups were 99p each and I thought they would be perfect for serving ice cream in.

Finally, these two books which I thought were total bargains for £1 each! Amy Poehler is hilarious and so I can't wait to dig into this. Also I couldn't resist the book on campervans as it is my dream to one day own a vinatge VW camper and go travelling all over europe in it!


Total: £30.22
So actually that doesn't seem too bad but when you take into account all the house stuff and sale stuff I bought this month I spent way too much money!

So let's put it this way, in February I am under no circumstances allowed to buy any clothes. I have warm enough clothes for the predicted weather and that is that.

I doubt I will need any toiletries as I have mentioned before I have a huge hoard that I NEED to work my way through.

So my aim? BUY NOTHING IN FEBRUARY. Besides food shopping of course, because y'know we need to eat! Its 29 days, what could possibly go wrong?


So there we go, I am going to refer to February as Frugal February! Check back next month to see how I got on!