Why I Love My Cineworld Unlimited Card 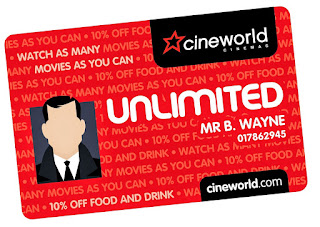 When I first met my husband, he had a cineworld unlimited card. At first I didn't really understand the appeal of it, as I thought we don't go to the cinema that often, and besides once we moved into Leicester the nearest cineworld was miles away!

However when I got my bus pass last year, and with cinema prices rising, it worked out that for £16.90 a month we would only have to see two films a month in order for this to be a bargain, and so with our nearest cinema nearly 2 hours bus ride away we decided to bite the bullet and go for it! In the first four months we have had it we have been to the cinema 23 times (including seeing the film Legend four times ... I guess we really liked it!) which has worked out that we paid £2.90 a film.

Having my unlimited card has also opened my eyes to how much I enjoy the atmosphere of the cinema, and got me to see films I wouldn't normally see! For example, I wouldn't have chosen Legend the first time but soon fell in love! It also means that Tom will come and see films with me that he would class as a waste of money (e.g. the good dinosaur - I loved it he wasn't so sure!) You also get invites to exclusive early screenings each month which is a nice bonus!

Now, there is a cineworld opened in Hinckley, which is still about an hour on the bus but we make the most of it by going for lunch, charity shopping and possibly watching two films one after the other!

On top of this you get 10% off snacks and drinks at the cinema and 25% off at chiquitos, Frankie and Bennys and also now Pizza Hut, along with local deals at some of the cinemas!

I would strongly recommend if you live near to a cineworld to get one of these cards, as you make your money back and more each month! You can sign up for an unlimited card HERE.