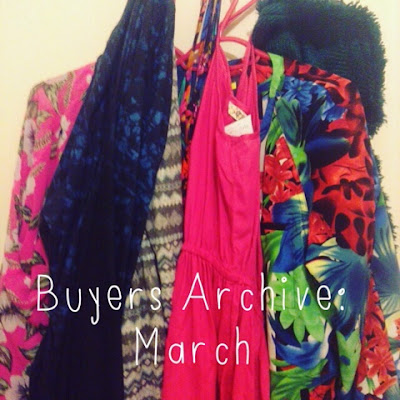 Honetly, one of my favourite posts to read on other blogs, The Buyers Archive, first introduced by the lovely Elise is a monthly round up of all the clothes, shoes and accesories that the blogger has bought that month. I think I probably really like it because I am nosey, and also because most of the bloggers I see taking part are avid charity shoppers like myself.

It is also a good way of keeping track of your spending, and as we all know I am supposed to be wearing my wardrobe, cutting it down etc. As we know though I love shopping. Actually the first two weeks of march I was pretty good, I didn't do too much shopping, but as the month went on I needed a bit of a pick me up. Feeling fat and frumpy I wanted some clothes that would make me feel good and thats what I went out and got.

So, without further delay, what did I get? 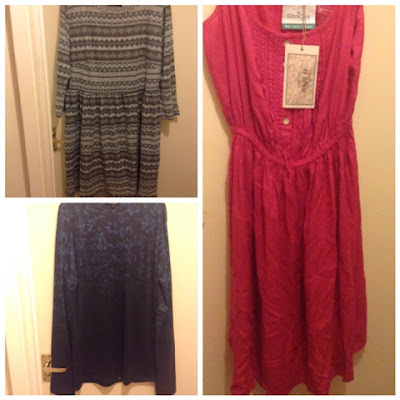 Starting at the top left I bought this thick Grey woollen dress from the British Heart Foundation in Leicester for £4.49. Its really thick material and thought it would be perfect in the cold weather we had been having, however since buying it, it has been a lot warmer!

Bottom left is this mens river island long sleeve top which I have been wearing to exercise in. It was £1.75 from the Age Uk shop in Lutterworth and makes a great top layer for when warming or cooling down during a workout.

Right is this beautiful, brand new with tags Joe Browns dress which I paid £3.99 for from the Extra Care shop in Leicester. I bought this when the sun came out and I had summer on my mind, but its so perfect to throw on with some sandals that I can't wait for the summer! 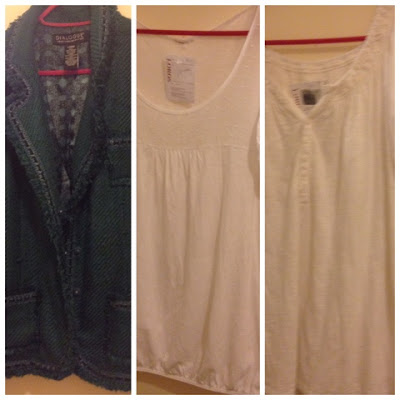 I bought this teal jacket right at the beginning of the month on a bit of an impulse. I wanted something that would be warm but also not a full coat. If I am being totally honest the colour drew me in and for £2.99 I couldnt resist. Bought from sense in coalville.

The two white tops were £1 each from the LOROS shop which I bought to pair with some of my patterned trousers and kimonos! 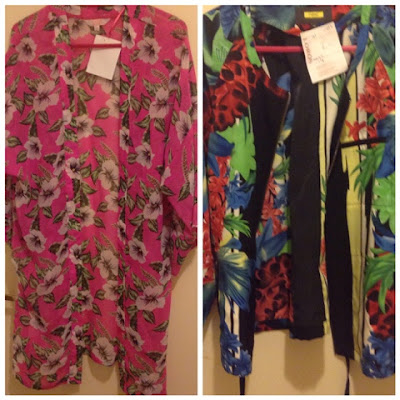 Talking of Kimonos I had a bit of a summer holiday inspired spree in LOROS in Leicester last week. I am going to Malta in June and I am determined to not pack too much and live in a uniform of denim shorts, white tees, patterned jackets and maxi dresses. 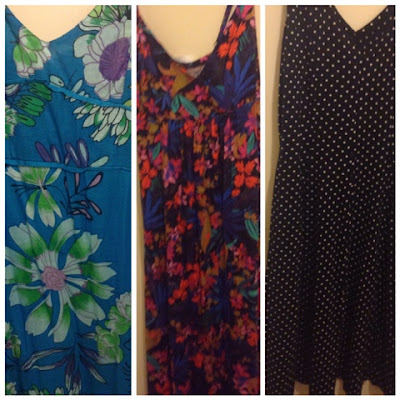 Also on this spree I bought the next two dresses. The first was £4 and from Loros. I thought it was a maxi dress but it actually finishes kind of mid calf and so its more a midi dress. Its by Kushi who I have never heard of before but I loved the colour and the pattern. The middle dress is a darker floral maxi from papaya originally and cost me £5.

The dress on the right may be my favourite bargain this month. Its a vintage marks and spencer dress and cost me £1.99. It fits lovely, going in at my waist and back out floating over my less than desirable areas! It was from samaritans in Leicester. 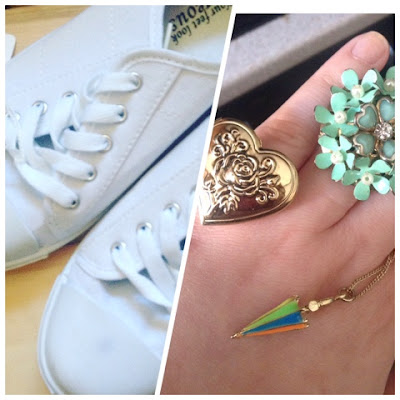 Lastly, a few accessories! These white canvas shoes I bought from Oxfam on Queens road. They are originally from New Look but I paid £4.99 for them! Then the two rings on the left were £1 each and the sweet little umberella necklace was 99p!

So there you have it, this month I spent a grand total of £42.19. I dont think thats bad at all! Especially when I was looking at paying £9.99 for one white top at New Look!