The realities of chronic illness ... 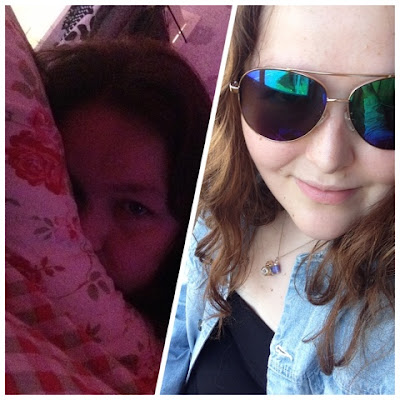 One of the biggest things I find living with an invisible illness is that outwardly I look fine. In fact after living with various health problems for about 10 years now (I am pretty sure it started with a bout of glandular fever when I was 16 that almost ended me in intensive care) I had started to convince myself it was all in my head when countless doctors failed to diagnose anything.

I had my gallbladder out, I had cysts removed from my ovaries. I lost weight which actually made me a lot more poorly (if FODMAP is to be believed this could have been because I added garlic to everything)

On a good day I feel great! I may have to go to the toilet numerous times but that is something I am used to. Sometimes it's difficult going to new places though. When I'm in Leicester or Birmingham I know where there are toilets. I know the public ones and also the department stores etc. I get nervous when I go further afield and don't necessarily know and that triggers my anxiety which makes my IBS worse (the joys.)

The photos above were taken a couple of days apart. On the right I was on my way to a blogger event at the stables (which I wasn't sure peas going to make) and I had a fantastic day, but it meant that I had to spend the next few days recovering!!

Sometimes I have to cancel plans last minute. I could be fine, go to bed, and wake up feeling like I have been hit by a train. Luckily, I have a fantastic group of friends who understand me. That said I have had friendships end because of this! One so called friend decided that "everything is about your illness" was a good line to throw at me. Needless to say we are no longer friends.

I guess I want to kind of round this up by saying thank you to those who understand, especially if you aren't personally living with a chronic illness! You are gems!

I'm hoping over the next few months to write more advice posts! I'm going to hopefully eat out while on the FODMAP elimination phase, attending events, mind and meditation etc