I will admit it - I have eaten out far too much this month! My kitchen has been an absolute state with all of our holiday clothes waiting to be washed and far too much time at work! However, I haven't been overly adventourous, picking up a mcdonalds here and there, or the same old chicken sandwich. That said, I have founf a few things this month that I really loved! After a really dissapointing roast dinner out at the beginning of the month Tom suggested we went to Johnny Custard for dessert. Located on the narborough road we had seen pictures on the Cool As Leicester instagram and had to give it a go. From the moment I walked in I could smell the waffles cooking and just had to have them! They were so delicious and topped with strawberries, white chocolate and a good sized jug of custard, I could eat this every day ... 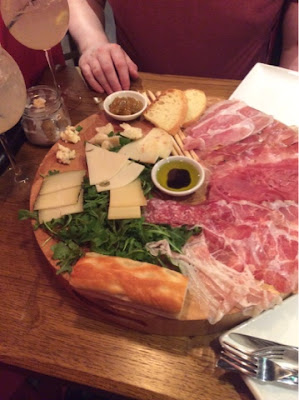 So, if you didn't see on my social media my husband passed his PHD this month and on the day we went out to celebrate. After some very strong belgian beers we decided that we were craving a cheese board and decided to try out one of the platters at Veeno. We opted for the Italia platter and a limocello spritz each and we will definetly be back for more! 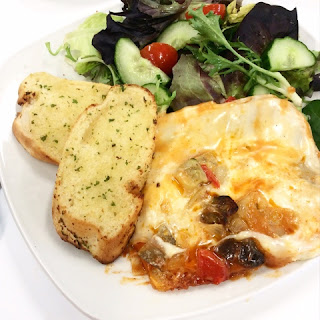 I had to include this little beauty! We went to tamworth to find the hubby a cable (dont ask!) and after getting caught in the rain decided to pop into sainsburys cafe to dry off and have some lunch. This veggie lasagne came with chips or salad and garlic bread and came in at just £5. I love veggie lasagne as I am not really a fan of mince ... unless I am eating a spaghetti bolognase! This was really delicious. 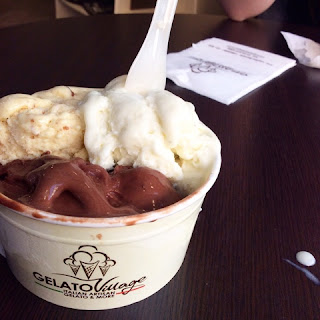 Gelato Village
I don't know why it has taken me so long to visit this beautiful gelato shop in Leicester! You know when you have a list as long as your arm of where you want to try? Eventually though I went along and I was not dissapointed. I had three scoops of gelato, chocolate brownie, biscotto and honey sage and lemon. I now want to go back and try every single flavour, again and again and again ...
What have you been loving this month?
Do you think there is anything I should try?
Charlotte Lucy
Posted by Charlotte Lucy at 08:00:00