When I attended the soft opening of the Leicester branch of Pho a few months back I was absolutely blown away by the flavors of the food. Despite the teething problems I was excited to take my husband there. However when we returned there were still a lot of dishes missing from the menu and a very rude waitress really soured my opinion. After speaking to the manager we were very kindly invited back to see if things had improved. Had they? 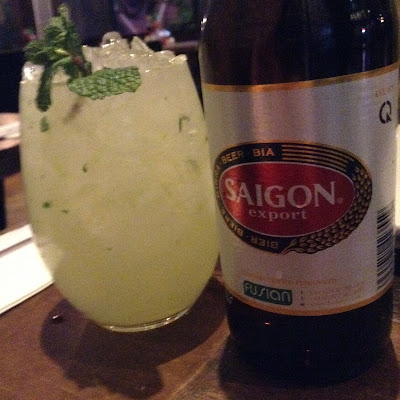 On arrival we were greeted into a warm and cosy restaurant by the bubbly members of staff. It was such a cold night I was looking forward to getting some food into our bellies! We ordered our drinks (with me having the gin spritzer and tom a Saigon beer) and were given time to browse the menu! The staff were on hand to help if we needed, but I already knew what we were both going to have! My drink was beautiful balanced, with the flavours of fresh mint lime and cucumber. The Saigon beer was also very light and refreshing (and I am not a beer drinker myself). We were also bought a plate of Banh Phong Tom which are prawn crackers with a sweet chilli sauce to eat through as we browsed. I think this was one of the reasons neither of us finished our mains ... but more on that later! I also highly recommend their fresh juices as they are delicious! Most you can have with or without ginger depending if you want to give it that kick! 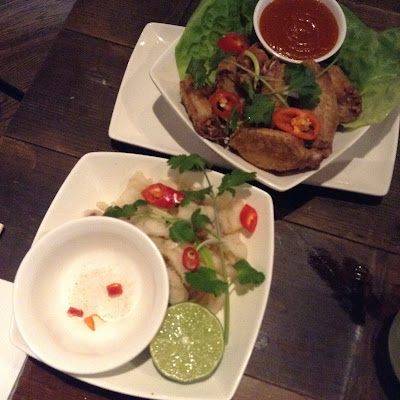 So on to starters. Anyone who knows me will know that I opted for the Muc Chien Gion (tender baby squid with a lime, pepper and salt dip) as it is potentially one of my favourite foods in the entire world. The squid is so crisp and light, unlike other restaurants where I find the batter far too heavy. You squeeze the lime into the dish so you can add as much or as little as you like. I went the whole way with it and so the dip was very sour but that's just how i like it! Tom on the other hand opted for the Canh Ga (crispy chicken wings with siracha) and in his own words proclaimed them the best chicken wings he has ever eaten! I have to admit they were perfectly crisp on the outside while remaining tender on the inside. Word of warning though, the siracha is one spicy dip! Even Tom who enjoys having his mouth on fire exercised caution with this dip! I had a pin head size amount and had to flag the waiter over and ask for water! 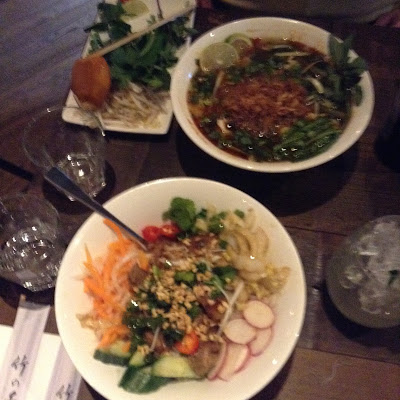 I will apologise that this photo is a bit blurry, as the food got to the table the aroma was so appealing that I am surprised I got a photo before we started eating! Tom went for the Spicy Green (can you see a theme here) all of the Pho is served with a herb plate so you can add which herbs and spices you like, making one flavour more intense. Tom had a great time smelling each herb and deciding what to add to his Pho. Now I am not a spice fan but after trying a mouthful of Toms I had serious envy! In his own words it was the most flavoursome food he had ever tasted and I have to agree with him. The dish was warming, the perfect thing for a cold winters night and I am sure as the nights draw ever colder I will be back for the spicy green! My broken rice dish with char grilled chicken thighs was also very tasty, topped with peanuts for that extra crunch. All of the ingredients tasted fresh and there was an array of flavours to really engage your taste buds! 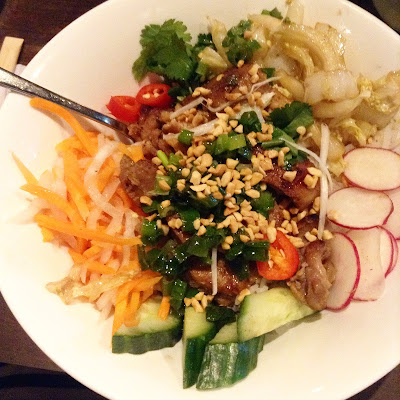 Just look at all the colours in that dish! Anyway, as I mentioned earlier we both become very full very quickly. I think due to the fact we were eating more slowly and really appreciating all of the flavours in each dish. This was not a problem though as we were able to have our leftovers put into takeaway tubs to take home (and leftovers are always the best right?) I am looking forward to having mine for lunch, and also contemplating whether eating this now at 9am would be a good idea?

Will we be re visiting Pho? Pho Sure we will! We had a fantastic meal and I am sure that it is now on our radar for the very near future. I plan to be in Leicester a lot during December for both work and pleasure and nothing could be better than a steaming bowl of Pho on a chilly day!

Charlotte Lucy
This meal was provided free of charge in exchange for a review. As always all opinions are my own.