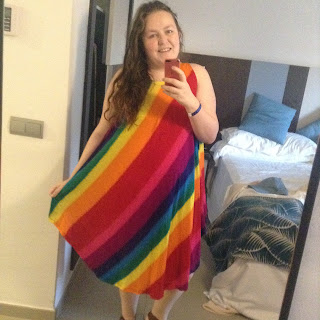 It started with a game of Darts.

I'm sure that's not the way most stories start, and actually it might not technically be the beginning but its where my mind goes to. We were on holiday, I was reading body positive power and Tom was drinking ice cold coca cola. The entertainment team came over to ask if we'd like to play darts. I hesitated but Tom said go on, so yes, I'll give it a go. It might sound like nothing but the anxiety that has lived with me for years gave me all the reasons to say no. Would I look stupid? What if I couldn't even hit the dart board and everyone laughed at me. I mean in the past I would have had a multitude of other thoughts about how my body would look and move while I played, but those thoughts are rarely present these days. I got up and played anyway. Against a group of English men and one German. I wasn't terrible, I hit the board and I had a great time.

So the next day I played again. I only went and won! Over the course of the week we played quite a bit and I won two of the tournaments! The thing that stood out in my mind is that old me would have sat on the sun bed and not have even joined in and here I was enjoying myself, playing darts and finding out I was actually quite good at it.

I think my mindset had already changed before we had even gone away though. October was a pretty shit month which started with a car crash and ended with me in surgery. It made me realise that I need to get out there and try more new things and so my new motto is I'll Give It A Go. I intend to try new things, new experiences, new foods and just generally push myself out of my comfort zone. I am going to come up with a sort of bucket list and instead of filling it full of things like get to my goal weight it will be all the things I want to try! I asked on my facebook what my friends think I should try and so far I have:

Anything else I should add to my list?
Posted by Charlotte Lucy at 06:00:00

Email ThisBlogThis!Share to TwitterShare to FacebookShare to Pinterest
Labels: #Illgiveitago