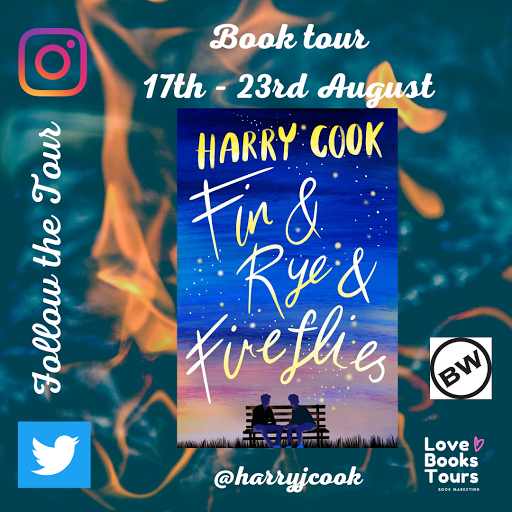 Welcome to the very first book tour here on my blog!

Today is my stop on the tour for Harry Cook's Fin & Rye & Fireflies.

Here is an extract from the book:

We arrive in Lochport on a Friday. A crappy day, a few days before my otherwise favourite holiday of the year, Halloween. We’ve been driving for about eight hours, which in teenage years equates to about a week. As we exit the highway and drift across Kettle Bridge, my first glimpse of our new home below reminds me of the It’s a Small World ride at Disneyland.

Old rust-coloured barns and maple trees line the street. The house, a two-storey monstrosity with a red double door and high arched windows (windows that I have an intense feeling I’ll want to throw myself out of before the day is over), sits leering at us.

“Fin, take your headphones out when I’m speaking to you,” Dad says, his forehead narrowing into his regular furrowed criss-cross. Mum shuffles in her seat and looks across at him, the air suddenly immensely stuffy and uncomfortable.

“Sorry,” I mumble, fumbling with my earbuds and stuffing them into the backpack at my feet.

“I asked you to go and open the door for your mother,” Dad almost barks. “Manners maketh the man, Fin.”

Not quite sure what the hell he’s talking about, but also not surprised by the cold tone in his voice, I get out of the car and greedily gulp in the fresh sea air from the harbour nearby. I wander around to Mum’s side, opening the door for her and standing back. She looks up at me sheepishly, a brush of embarrassment lingering in her smile as she steps out. I smile back, retrieving a stick of sour grape gum from my jeans pocket as Dad joins us.

“So, what do we think?” he asks, his eyes switching between Mum and me, as if he’s a carnival clown and we’re about to throw a hoop at him to win an inflammable soft toy as a prize.

I give a thumbs-up, popping the piece of gum in my mouth before I turn to head inside.

So, I guess now is probably a good a time as any to explain how the hell I found myself upheaved to a brand-new town and into a creepy old house that resembles the set of The Texas Chainsaw Massacre.

This book wasn't my cup of tea. I really appreciated the cuteness of it (is that even a word?) but I found the characters really one dimensional. I also felt that the characters were diverse for diversity's sake. For example, June a trans girl, who is also a person of colour I felt like the author was just trying to play diversity bingo as those aspects of her identity weren't really fleshed out.
Posted by Charlotte Lucy at 09:00:00